Graffiti of the Salaf

Here is a picture of what is considered (to date) the oldest dated Islamic inscription, from 24H, when the Rightly Guided Caliph ‘Umar b. Al-Khattāb – Allāh be pleased with him – was assassinated. It is located at Al-‘Ulā in present day Saudi Arabia. It is one of a number of ‘graffiti’ inscriptions made by travelers and pilgrims from the first few centuries of Islām. 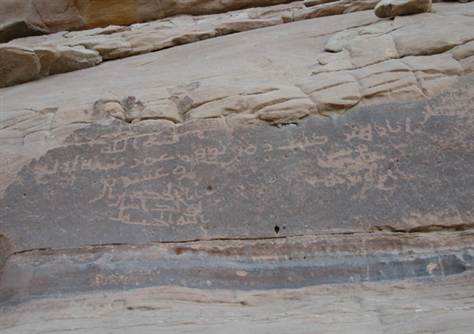 UNESCO included this amazing archaeological find in its Memory of the World Register of Documentary Collections. An update entry states:

Saudi Arabia – Earliest Islamic (Kufic) Inscription. This very well preserved inscription is located on a red sandstone block of rock south of Qa’a al Muatadil, north of Sharma in al-Ula, northwest of Saudi Arabia on the ancient trade and pilgrimage route connecting the early Islamic city of al-Mabiyat with Madain Saleh. It is the oldest Islamic inscription found so far. It mentions the date of the death of the second Caliph of Islam, Omar bin al-Khattab and reads as follows: “In the name of God, I Zuhair wrote the date of the death of Omar the year four and twenty (Hegrah)”. Caliph Omar bin al-Khattab died on the last night of the month of Dul-Hajj of the year 23 Hegrah, and was buried next day on the first day of Muharram of the new year 24 Hegrah (corresponding to 644 AD).

Note: The discoverers and local experts say the script is Hijāzī, not Kufic.

Here’s a trace of the text:

The inscription can be translated as follows:

In the Name of Allah

I, Zuhayr, wrote [this] at the time ‘Umar died, in the year four

Next to this inscription, it reads:

It is reported that the son of Al-Fuḍayl b. ‘Ayyāḍ – Allāh have mercy on him – said to his father:

Father! How sweet (beautiful) the speech of the Companions is! [Al-Fuḍayl] said, “Son, do you know why it was so sweet?” He replied, “No father, I do not.” He said, “Because they sought Allāh the Exalted when they spoke.”

It is reported that Al-Sha’bī – Allāh have mercy on him – said:

The Sahabah on Leaving the Salah

The Companions of Allāh’s Messenger – Allah’s praise and peace be upon him – did not consider the leaving of any action to be kufr (unbelief), except the prayer (ṣalāh).

The Best of then and Now

It is reported that Mujāhid – Allāh have mercy on him – said:

Those who strive and exert themselves (al-mujtahid) amongst you today are like those who used to play around amongst those before you.